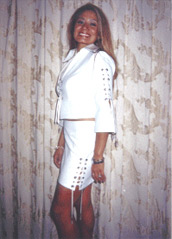 Jimmy and Alma Petula the night of the Malibu Film Festival “Gala” opening night at the Lilly’s Malibu Castle. Alma wore a custom made leather outfit designed for her for the event by Jackie Robbins. The designer stated the outfit was a collaborative effort between client and designer to create a personalized look for the black-tie event that reflected the client’s very hip and sexy style with class and grace. The outfit was made of a pearlized butter soft lambskin, in a double-tone silver and gold. Trimmed in brass grommets and laces finished in crystals and beads. Congratulations to Jimmy for the amazing creation of his film “Reversal”, which he starred in, directed and wrote! He took home “Best Film” prizes in competition, and then moved on to New York’s film festival to do the same!
News