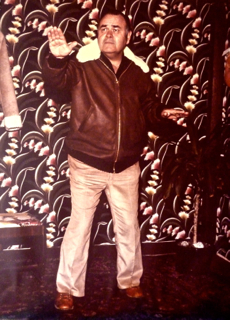 Last night, quite by chance I watched a new film about an old Friend of Leather Waves, Jonathan Winters. It weaves a crazy, funny and deeply touching story/portrait of Comedy, Painting, Movie Making, The World of Art and Aging. Bravo, Mr. Winters, you still strike an awesome pose on the edge!
love this movie, https://www.certifiablyjonathan.com
Mr. Winters has been an appreciator of Leather Waves and wears his leathers well. Although, he was difficult to work for because he made me laugh so hard I had trouble doing my job. This was a photo he generously gave to me showing his delight with the new jacket I had just made him. I’m pretty sure the year was 1979, in my original space at the Malibu Country Mart, first incarnation.
1970's Archives, Archives, Blog, News