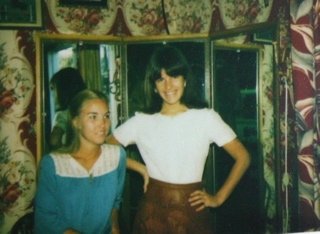 Leather Waves history……… In the beginning there was Nidra Winger That’s Nidra Winger Moss and I back in 1976 or “77 at the first incarnation of Leather Waves in the Malibu Country Mart. I was 23 and I think Nidra was 18 or 19. How sweet and tender we were. Nidra worked with me on and off for 20 years. She became much more than my first and most valued ever employee. She’s the most superb human being. She went on to serve the Malibu community in so many ways. We always enjoyed each other’s company, she was fully trustworthy in every way and she became a skillful leatherworker. At the time of this photo I was making handlaced leather clothing, which were patchworked pieces laced together with leather laces that we cut by hand, (see the skirt I am wearing), they became very popular and Nidra was my chief lacer…her work was always perfect, and she was fast! I was blessed with Nidra, we became lifelong friends, and I appreciate her so much! In the day, Nidra was one of the most sought after beauties on Surfrider beach…with her long beautiful blond hair, mini skirts and beautiful smile, she had all the guys falling off their boards and doing summersaults on the shore, giggle :0)
Blog, History